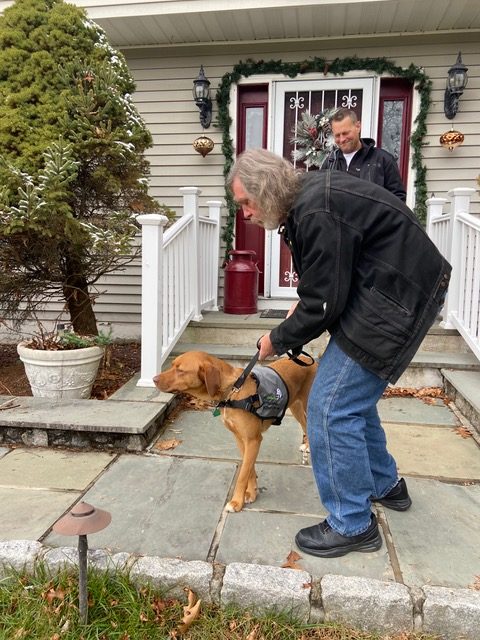 Putnam Service Dogs placed Callie with Bob in November 2021. Bob had suffered a traumatic brain injury. A perilous symptom remains from his injury,  his fragile balance, which had kept him confined at home. When he did leave his house,  his wife would walk in front of him, her arms spread apart to protect him from losing his balance and falling. Bob couldn’t go anywhere alone. This past May, Bob’s wife passed,  leaving him heartbroken and extremely vulnerable. After that, when Bob did leave his house, he’d use a cane, and someone would have to accompany him.

Then PSD stepped in! One week after he received his highly trained dog, Callie, he decided to try walking his front steps and walkway. Before Callie, Bob had never had to courage to walk this route, even with his wife’s protection and assistance. Bob walked down his front steps without his cane, with Callie close in hand. She matched his uncertain pace exactly, staying with him each step of the way. Bob smiled as he walked down his front walk to the street, independently, successfully, and safely making the journey for the first time in 35 years! Now he and Callie frequently visit neighbors, and Bob eats at his favorite diner with Callie under the table. The owner of the diner seats Bob at the front table because Callie is so well behaved. Bob and Callie are the center of attention.